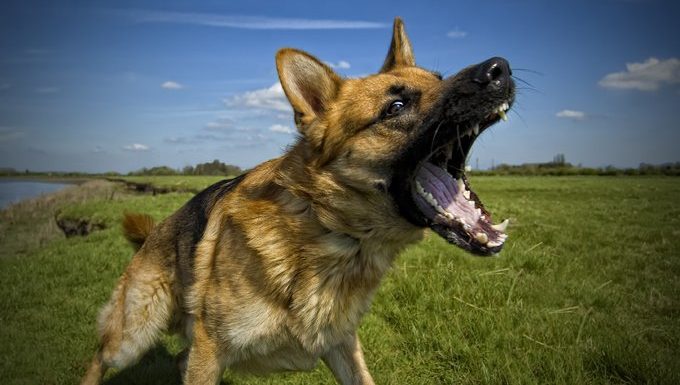 DogSpeak is a series that translates canine behaviors so that we, as pet parents, can better understand and communicate with our dogs. Aggression can be challenging for dog lovers to understand, and there are many reasons a dog might engage in aggressive behaviors.

There are very few dogs who are prone to aggression regardless of the situation. That’s why it’s helpful to think in terms of aggressive behaviors rather than aggressive dogs when trying to translate your dog’s tendencies to growl or bite.

Usually these behaviors relate to specific events, relationships, or environments. Keeping this in mind, here are some terms commonly used when labeling aggressive behavior:

Many dogs will exhibit aggressive behaviors when guarding a valued resource. The resource can be anything, not just food or a toy. It could be their bed or even their human.

Usually these dogs give warnings, such as growling, snarling, or air-snapping. However, they can be pushed into biting if the warnings are not heeded.

This is most common when dogs, other animals, or guests are allowed in a dog’s “territory” without their human present, or if the pet parent is not communicating clearly to the dog that the intruders pose no threat.

It’s important that the dog parent make it clear that they are the one who’s ultimately in charge of the territory.

Related to territorial aggression, protective aggression happens when a dog perceives a threat to their family.

Mother dogs may react aggressively when a person or animal approaches her puppies, for instance.

This can also be called “redirected” aggression. It happens when a dog reacts to some stimulus that they can’t interact with.

For example, a dog who hears a doorbell or sees a dog through the window might react aggressively to a person or pet inside the house, instead, as they can’t directly address the stimulus.

This happens when something prevents a dog from doing what they need or want to do, and it can overlap with misplaced aggression. The dog lashes out at the nearest bystander when they can’t act on their impulse.

This behavior is commonly seen when dogs become overly excited. For example, a dog on a leash may see another dog and want to approach, but the pet parent might be preventing the interaction by holding the leash. The dog may lash out in frustration.

Very similar to misplaced aggression, this happens when a dog who becomes overly excited during play with another dog, pet, or person suddenly switches over to aggressive behavior.

Dogs in pain may try to bite anyone or anything that they think is the cause of their pain or may cause them more pain. They may nip if you try to examine an injury, for example, out of fear that you might hurt them further.

They sometimes even direct aggression toward themselves, such as a dog who bites their own foot when it’s caught in a trap. This type of aggression is part of a canine’s survival instinct, as are most aggressive behaviors.

These dogs display aggressive behaviors when afraid, and may actually bite if cornered with no escape.

Sometimes fearful dogs progress to taking an offensive position if they realize that showing aggression toward people — as opposed to backing away — is successful in making the person retreat.

This type of aggression includes behaviors designed to increase the dog’s social status among peers.

Usually peers would mean other dogs. However, sometimes dogs who have not been under consistent and kind human leadership will exhibit socially driven aggression toward human beings — often called “dominance” aggression.

Usually hormonally driven aggression refers to aggression caused by a female dog being in heat.

It can involve males fighting over a possible mate, or the female, herself, fighting with other dogs of either sex.

Medications, particularly steroids, may cause certain dogs to display aggressive behavior, similar to a condition in humans called steroid-induced psychosis.

Medical conditions, such as thyroid imbalances or even ear infections, can cause aggressive behaviors in dogs.

A fearful dog whose behavior has been reinforced when they’re afraid would be an example of unintentionally learned behavior. For instance, when a dog growls and shies away, their human tries to calm them by petting, which accidentally reinforces the behavior.

Some dogs have a higher natural prey drive than others. They may be driven to attack wildlife, other pets, or even children playing a game of chase.

The instinct to hunt takes over, and the dog may bite.

What To Do About Aggression 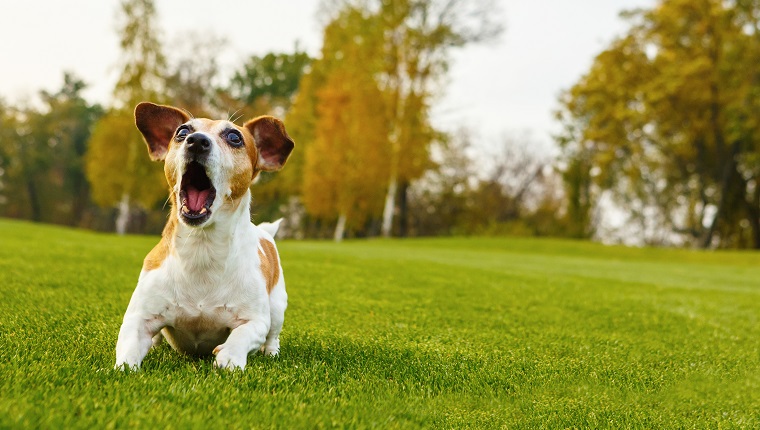 One way to curb aggression is to socialize and train your dog in different situations from an early age. This goes a long way in preventing aggressive behavior later in life.

However, for dogs who come into the family or get adopted later in life, that may not be an option.

Understanding the causes of a dog’s aggression can be helpful for addressing the problem. That said, if your dog exhibits aggressive behavior, try not to label it too quickly.

Often there is more than one root cause, so it is best to make an appointment with an experienced canine behavior counselor or behaviorist and give them a thorough history of your dog’s past behavior.

If your dog starts showing signs of aggressive behavior suddenly, you should make an appointment with your veterinarian. This may be a sign of pain or a medical condition that your vet can address.

Whether you see your vet, a behaviorist, or both, be sure to include details about any incidents of aggressive behavior, even minor warning behaviors like growling, so they can develop a successful behavior modification program or course of treatment.

With careful diagnosis and time, these behaviors can usually be trained out of your dog.

Has your dog ever shown signs of aggression? How did you address the behavior? Let us know in the comments below!